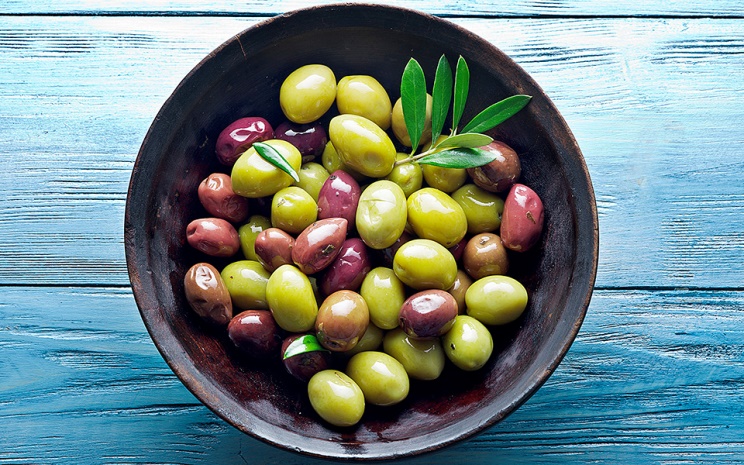 Olive is a traditional agricultural Greek product, as the climate and the landscape of Greece, favor its growth and cultivation. Greece is the second larger producer of table olives in the EU, and a major exporter of this agricultural product. According to the new trade standard there are 4 main categories commercial olive types which are defined by their processing. Each type of processing is used for certain olive varieties, which are described in turn under each process.

1. Natural olives
also known as Greek type olives. They can be green, blond but mainly naturally ripe black olives, fermented in brine, until they lose their bitter flavor by natural process. The most common Natural olive varieties are:
• Kalamata olives. Unique olive variety with purple color , almond shape and crunchy texture. This olive is considered as one of the best varieties in the world. It is cultivated in the area of Pelopponese (Messinia and Laconia) and Central Greece in the area of Agrinion.
• Black Amfissa olives (Konservolia). Naturally ripe black olives, fleshy and meaty they come in large sizes with a relatively small core up to Mammoth (101-110) size.
• Crushed olives of Megara. Green olives collected semi-ripe, crushed and placed in brine, depending on a recipe with lemon and herbs or vinegar.
• Crushed olives of Nafplion. Collected semi-ripe this olives are crushed, curred in brine and combined with lemon and spices.
• Throumba of Thassos, naturaly black and rinkled olives. A variety that matures on the tree. It can then be consumed directly or placed in salt for further preservation.
2. Treated olives
also known as Spanish type olives. Mainly green, processed in a in a diluted lye solution (sodium hydroxide) The lye is then replaced by water, until the olives are clean and then fermentation is carried out in suitable containers in which the olives are covered with brine.
• Chalkidiki Green olive, is plump and fleshy variety of green olives with a unique taste and a relatively small core. They come whole, pitted, or stuffed with a variety of fillings such as almonds, red sweet pepper, garlic, lemon, orange, carrot, piri-piri, feta cheese, sun dried tomato and other specialties. This olive comes in a larger sizes compared to the Spanish varieties. The usual sizes are from Jumbo (181-200) to Super Super Mammoth (81-90)
• Amfissa Green olive, very similar to the Chalkidiki olive but in slightly smaller sizes up to Mamoth(101-110)
3. Olives treated by oxidation
also known as confit olives, where olives are darkened in a solution of lye with and oxidized by air.
4. Dehydrated olives
using salt as a mean for the process
5. PDO (Protected designation of origin) and PGI (Protected Geographical Indication) olive oils.

This variety is of medium hardiness. The fruit mature ripens between December and January. it is harvested when it has undergone full colour change. It has elongated and asymmetric shape where its weight is quite high. It is moderately resistant to cold and sensitive to excessively hot climates. It is the most famous table olive around the world.

This is the most popular variety in Greece. The 60% of the total Greek production is Koroneiki. It has a small size and matures relatively from early October to December. Its weight is from 0.3 to 1.0 grams and its length from 12 to 15 millimeters. Although the fact that Koroneiki tree needs minor attention and can stand low temperature during the winter, it gives the finest olive oil comparing to other varieties.

This variety matures slowly and its collection is from end of December till beginning of January. Its fruit has medium size with an oval shape. Its weight is from 2.2 till 2.9 grams, and its length can vary from 7.5 to 25 millimeters. Olive oil from Athinolia is of excellent quality with a rather low viscosity.

It is a variety which gives flowers from end of April till end of May. Its fruits mature end of October till end of November. The size of the fruit is rather small with dimensions of 10 to 16 millimeters and it has an average weight of 1.2 grams.

This variety is of medium hardiness and it has a medium rooting ability. Mature and harvest date depends on the end use of the fruit. It has an ovoid shape. Due to the fact that it has a medium content of good quality olive oil it is mostly used as table oil or olive spread. It is resistant to cold and olive knot whereas it is sensitive to vertieillium wilt and moderately sensitive to dry climates. This variety is also of medium hardiness as Kalamon. The fruit mature early and its harvest is being done during November and December. This olive fruit doesn't turn completely black when it reaches maturity. It has an elongated and asymmetric shape where its weight is quite high. It is resistant to drought and cold.

This variety also matures slowly and the best time for harvesting is from end of January till beginning of February. The fruit has average dimensions with an oval shape. Its weight varies from 2.2 to 2.9 grams. What characterizes Manaki tree is that it can resist to high altitudes, where other varieties, except Athinolia, cannot thrive.

We use cookies on our website to give you the most relevant experience by remembering your preferences and repeat visits. By clicking “Accept All”, you consent to the use of ALL the cookies. However, you may visit "Cookie Settings" to provide a controlled consent.
Cookie SettingsAccept All
Reject All
Manage consent

This website uses cookies to improve your experience while you navigate through the website. Out of these, the cookies that are categorized as necessary are stored on your browser as they are essential for the working of basic functionalities of the website. We also use third-party cookies that help us analyze and understand how you use this website. These cookies will be stored in your browser only with your consent. You also have the option to opt-out of these cookies. But opting out of some of these cookies may affect your browsing experience.
Necessary Always Enabled
Necessary cookies are absolutely essential for the website to function properly. These cookies ensure basic functionalities and security features of the website, anonymously.
Functional
Functional cookies help to perform certain functionalities like sharing the content of the website on social media platforms, collect feedbacks, and other third-party features.
Performance
Performance cookies are used to understand and analyze the key performance indexes of the website which helps in delivering a better user experience for the visitors.
Analytics
Analytical cookies are used to understand how visitors interact with the website. These cookies help provide information on metrics the number of visitors, bounce rate, traffic source, etc.
Advertisement
Advertisement cookies are used to provide visitors with relevant ads and marketing campaigns. These cookies track visitors across websites and collect information to provide customized ads.
Others
Other uncategorized cookies are those that are being analyzed and have not been classified into a category as yet.
SAVE & ACCEPT